Organizers at Canadian Forces Base Trenton, Ontario, Canada were rewarded for their tremendous efforts when approximately 80,000 people attended QIAS2016, the first airshow held at CFB Trenton since 2003.   The biannual event had always been popular but military personnel felt that, while Canadian soldiers fought overseas, a celebration would be inappropriate.

With this in mind, star performers included WWII heroes the Avro Lancaster and the B25 Mitchell Bomber both from Hamilton Ontario’s Warplane Heritage Museum;  two P51D Mustangs; and the Harvard Aerobatic Formation Team from Tillsonburg, Ontario.  Modern workhorses the RCAF SAR Griffon Helicopter, the CC-130 Hercules, and the C-177 Globemaster strutted their stuff.

Harvard fly-by with two American F22s on the ramp 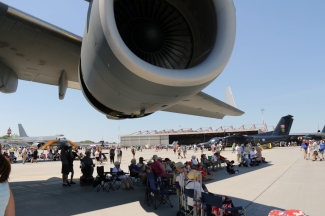 Under the wing, escaping some of the 30C heat

A future pilot at her first airshow!

Framed by the landing light cover 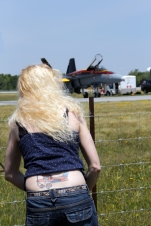 Cessna single-engine C150 tattoo with F18 on the ramp