For years I have wanted to visit Camp Leakey, a wilderness refuge for orphaned, abandoned, and rescued Orang Utans started by Dr. Birute Galdikas in the 1970s. Camp Leakey (after the primatologist Louis Leakey and should not be confused with “leaky boat”) is one of three refuges within Tanjung Puting National Park, Kalimantan, Indonesia, on the island of Borneo.

So desperate was I to see these gentle beings, I organized a minimum of four stops on our voyage along the Sekonyer River, a name derived from the locals’ inability to describe the sunken Dutch schooner at the mouth of the river.

I needn’t have worried. Tom, the younger brother of Thomas the Alpha Male, greeted us on the boardwalk into the jungle (ten feet above the hundreds of leeches that plagued Dr Galdikas and crew).  He rested placidly in this pose until he lunged for treats in the pocket of one of the guests.

And like so much of life, the experience of getting there was more than half the fun. For four fantastic days we puttered along, travelling in our two-storey klotok,  a boat given an onomatopoeic name that mimics the sound of its’ one cylinder engine.  Along the narrow Sekonyer River we had occasional glimpses of solitary wild Orang Utans and troups of Proboscis Monkeys. Bee-Eaters darted, searching for bugs.  Kingfishers soared from branch-to-branch, eyes piercing trained on the chocolate brown water for their next fish dinner.

Our voyage into Kalimantan and Indonesia had started.  And everything was perfect. 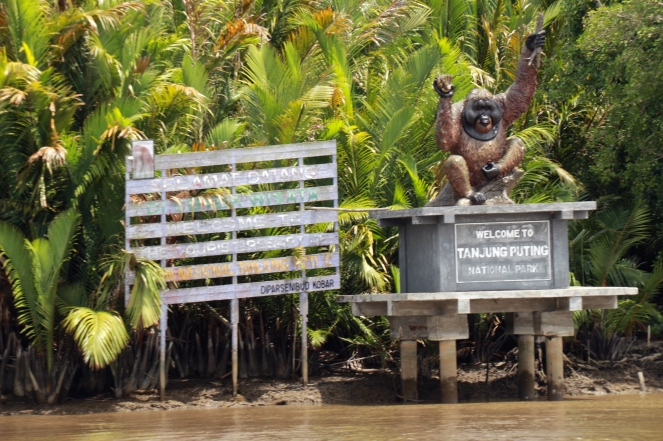 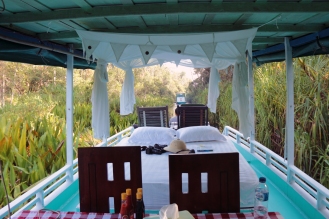 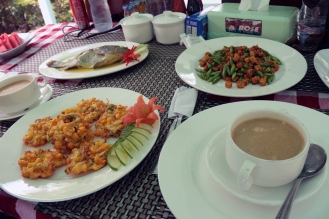 A typical meal – vegetarian for me, fish for Jeff 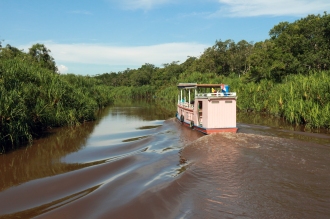 One of the other boats going upriver 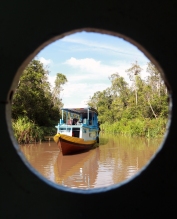 View from the (bathroom) porthole

The eldest female at Camp Leakey bids us farewell 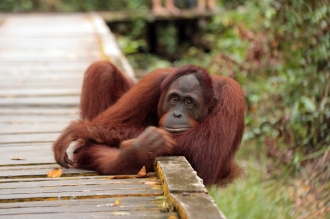 Tom, the younger brother of Thomas, the alpha male