After a peaceful night in Jakarta, we flew Trigana Air to Pangkalan Buun (Mr. Buun’s Jetty), our first destination in Kalimantan. As a former airline pilot, I’d researched Trigana Air. I was a bit nervous about Trigana but they provided the only air service there from Jakarta!  At first glance, their reputation didn’t appear to be exactly stellar – in fact, they are on the European no-fly list!  (Not encouraging)

However I was reassured that their mishaps and crashes typically occurred on landing and almost all had been in West Papua.  That explained everything and actually made their pilots heroes in my eyes for even attempting to fly there.

Years ago, a friend of mine had flown for MAF in Papua New Guinea (same island as West Papua but a different country).   After asking me to move there to replace a pilot his company had just “lost”, he felt obliged to explain a wee bit further. “Well, he didn’t quit to go to another airline.  He crashed.   PNG is a rugged and mountainous country, with deep valleys and little flat land.   Take-offs are similar to those in northern Canada: start from the very end of the very short runway, stomp on the brakes, maybe use a little more flap than recommended to provide a burst of lift, apply full power THEN release the brakes.” And we both knew PMG’s heat and humidity further reduced aircraft performance.

I was convinced that Trigana was safe, yet….

Of course, I worried all for nothing!   Like the other inland flights we took throughout Kalimantan, Trigana’s crew was professional, we departed on time, the landings & take-offs were perfect, and the plane was in excellent condition inside and out.

Danson, our interpreter, met us at the airport in a late model Toyota and off we went. Following a short tour of the local boat docks, we walked the planks onto our klotok, a lyrically onomatopoeic name for the local boats.  Dozens of Blue-spotted mudskippers scooted across the mud at low tide.  On board Captain Mul (an ex-illegal logger) and Chef Ali greeted us.

Our 4 day river journey up the Sekonyer River had begun.

Our boat had a private bedroom with air-conditioning and TWO bathrooms.  No not one for me and one for Jeff but rather, one with squat toilet and shower for the crew (or us if we wished), and one with “Western” style toilet and shower (intended for the passengers).  In almost every washroom we visited in Indonesia (and later Japan), whether in a restaurant, a boat, or the airport, visual instructions were provided, e.g., image of a person squatting on a Western Toilet.

We settled into our wooden recliners on the top deck.  Our klotok put-putted along the river, allowing ample time to spot wild orangs and proboscis monkey troupes.  We noticed that for those who prefer a bed on dry land, options include one lodge and a couple villages that offer home-stays.  We encountered a couple dozen other klotoks, some accommodating 4 passengers but most designed for 2 people.  Some had private rooms on the main deck for the crew while the passengers slept on the upper open deck.  Others had private rooms for the guests.    We observed many of the female crew members (aka wives of the captains who washed and cooked) with rice paste sunblock – effective but not so attractive. 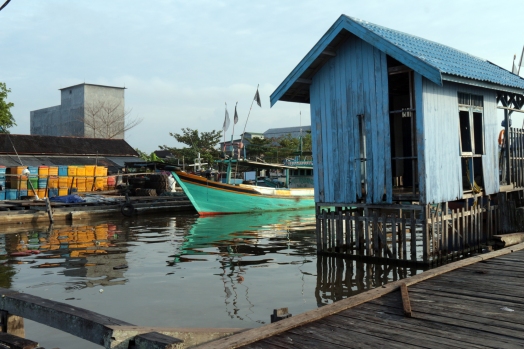 walking the planks to our boat, Pangkalan Buun 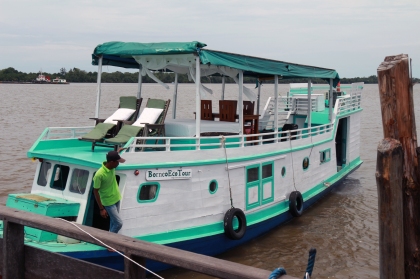 Chef Ali: The forest is my life 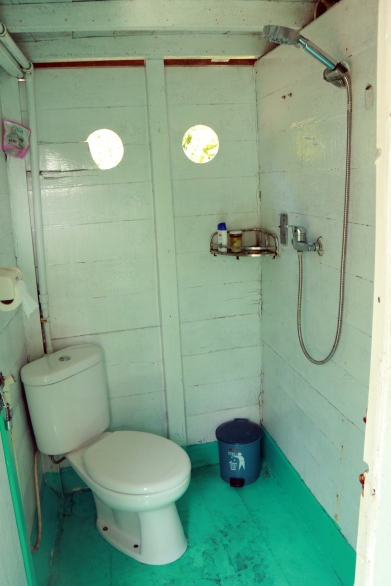 Our toilet (and shower)

How to use the western toilet